Here I sit, breakfast in hand, on the third day after the Jedburgh Festival of Running 10k only now having the time to sit and compose my blog. Truth is this is the first opportunity I’ve had and that’s only because today is my day off! After the race I spent a lovely afternoon with my husband and chief supporter and our two dogs wandering around historic Jedburgh itself and then was treated to a pub dinner back in our village. And I think spending time as a couple is so important, especially with our busy lives; every opportunity to spend time together is relished. And so, as a result, this blog was filed away at the back of my mind.

As Monday and Tuesday are school teaching days today is my first proper chance to sit down and write this. It’s 8am and I’m up, the dog is up, the chickens are up and I have my first load of washing in the machine! And the computer is on…

So, Sunday’s race. Jedburgh is one of the nicest of the Border Towns. Steeped in history it is very pretty wee town and the running festival is obviously a local highlight. Not having been to this race before we had no idea what the parking was like, so we set off at 8am and arrived at about 9:30am, with the race due to start at 11. And I’m glad we arrived early. Others had already arrived and were gently jogging around the town to warm up. Within half an hour folk were queuing for non-existant spaces in the car park. I wouldn’t have liked to have been late!

We wandered down to the start area and met up with George, a retired teacher, husband of my work colleague Linda and a long-standing runner. He is delighted that I am running and encourages everything that I do. He’s a shining example of the Good Runners I’ve met, the ones who – no matter what – send you encouragements. They’re the ones who ask what my 10k time might be and say “Brilliant, that’s great!” and make me feel less like a snail. In contrast I’ve met my share of “Bad Runners”. These are the ones who are so far up themselves they have lost sight of anyone else. They condescend to talk to you and when they do they tell you your times are too slow, or that you don’t run often enough and then tell you to give up, it’s not worth it. And believe me, I’ve met a few of these.

We chatted with George for a while. He did the 10k last year in its inaugural year, but this year had applied for the half and then instantly regretted it! Unable to change his entry George had decided he’d just go easy and pay with consequences later. We wished each other luck and I went off to register. The event was well organised; our numbers and timing chips were ready for collection with the 10k people and Half people registering in different areas. On hand was a sponsors tent for all those wanting last minute goodies. The event was sponsored by Scottish running shop Run 4 It. The helpful staff in the Edinburgh store helped me to choose my first pair of Asics.

With my number and chip and t-shirt in hand we grabbed a coffee (and a banana) and strolled back to the car park. The toilets were public ones, one set in each car park. Queuing was minimal and the toilets were well maintained. Believe me, this is an important issue! Parked next to us were two guys who were obviously well experienced runners. They showed me how to put my chip onto my shoes and we chatted about the event. Again, these were “Good Runners”, encouraging my predicted time and helping me through the ordeal of this being my first race here and only my third race in total. After walking the dogs (yes, everyone else jogged to warm up – I walked the dogs reasonably fast!) I went through some dynamic stretches and that was me ready to roll. 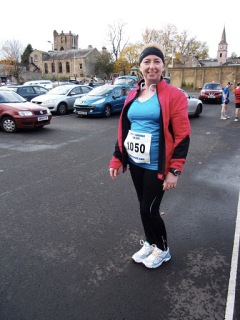 A droan of bagpipes marked the start and all of a sudden the sea of runners ahead of me started to boil as runners jogged off the startline. The 10k runners were meant to set off at the back of the line, slightly after the half runners. The internet blurb said that the 10k runners would be held behind a row of stewards who would only release us after the half runners had reached the market square. All I can say is they must have got there pretty quick because there appeared to be no delay at all! I started towards the back.

We ran through the town centre to much applause. I caught sight of my husband up high on a walled embankment and waved. Unusually for me I started off too slow, jogging along with the back markers. I waited until the road opened out though before I picked up my pace. I wanted to run average 10 minute miles which, with my walking breaks, would mean I would have to run at about 8:30 – 9 minute miles. No sweat.

Once we’d cleared the town the route banked down off to the right. It was at that point I caught sight of what was to be the first of many hills. The sharp ascent seemed to last forever and many around me had already started to walk. I managed to get to almost the top before I had to walk. Great start! But my average was around 10 minutes, despite this, so I just kept plugging away. Once we’d reached the top of the hill we were treated to a downhill section which I took as fast as I could before reaching another hill. Whoever described the course as “undulating” was having a laugh. That was the biggest understatement of the year! It soon became clear to me that achieving a personal 10k best wasn’t going to be on the cards. I continued to try for it, but my PB was set on a flat course, more or less, this was anything but flat!

I ran 4:1 intervals which seemed to confuse runners around me who would see me storm past them on running sections only to be walking a bit further up the road and then come storming past them again! I gradually overtook those around me with my yo-yo running, putting a greater space between me and them on running sectors. I think the intervals will have helped me on this course especially. Running the intervals helped me to run my own race as well, unhindered by anyone else.

Once we’d met up with the main road the running got a little easier as we ran to the 5k turn point on level ground. And then…guess what? Yes, a hill! Hoorah! The main road climbed up to a bridge over the river and it was one of those long, long climbs that just wear you away. I just kept running. I was slow, but I was running it. It took what life was left out of my legs.

Once the apex of the bridge appeared I knew the route in. We’d followed part of it on the way that morning. It was a beautiful treelined avenue with us running on the path alongside the road. It was downhill for a way, which was great and I tried to reclaim some lost speed. I could see my average pace dropping from 11 minute miles to 10 and a half. It was still possible, I could still do this. As I ran downhill I caught sight of a penny on top of the leaves. It made me think of all of the other runners I knew who were running races all over the world that same day. It spurred me on for a while. The wind had picked up however and was blowing into us all the way home. I was glad I wasn’t running the half.

The last km was hard mentally. I needed someone running with me at that point, not necessarily encouraging me, just someone stopping me from walking. And I walked too much on that last km, far too much.

I ran/walked past the householders who had come out onto their front lawns to applaud us coming in. I High 5’d two little girls who must have stood there waiting for 5’s for half an hour so far. Bless them! And then I saw the finish arch. I couldn’t sprint, not like last time where I was able to pick up speed in the last 200m. I was spent. I crossed the line in 66:18, just under a minute over my best time.

Initially I was very disappointed with my time, but then I started listening to others. Everyone was moaning! It was a tough course and I wonder how many PBs had actually been broken that day? The two guys we parked next to certainly didn’t PB it. They were about as far over their time as I was mine. Considering the course was as hilly as it was, I concluded, I’d done well to get as close to my PB. I started to feel less stressed and started to enjoy the fact that I am becoming a stronger, more experienced racer. I just need to believe in myself a bit more. My legs are strong; my head has to be stronger.

And my medal! What a fab medal I got! 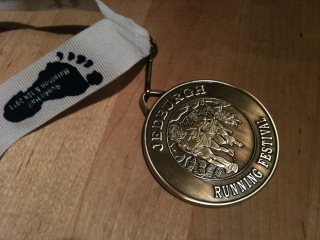 I will do this one again next year. The atmosphere was great, so relaxed and easy-osy. I met some genuinely nice people.