Well almost! It had rained so heavily yesterday that the woods were awash. I decided to go anyway because I didn’t want to run on the treadmill and I really wanted to take Murphy Dog with me.

I started off reasonably, ignoring the pace of the music I was listening to. The first part of the track consists of rocks and they were like ice. Before I rounded the second corner Murphy darted off to the right and stood looking into the trees. I couldn’t see what he was looking at and carried on. As we turned the corner I spotted a figure walking towards us. So did Murphy and he was terrified. Why? I don’t know. He is generally a very confident dog, but now and again some things just spook him and he freezes. I only realised that he was stood stock still after a wee while and stopped to call him to me. As I called him I discovered what he had seen earlier.

A red deer wandered casually onto the path within a few feet of Murphy, stood behind him and looked straight at me. It was a wonderful moment. Murphy had no idea that the deer was there; he was still focused on the man walking towards him. Amazing! The deer walked off into the trees at the other side of the path, Murphy still none the wiser!

The rest of the run was pretty uneventful, although I did stop to take some photos of the trail at the mid way point. I wasn’t racing, but I was working hard on the terrain, so stopping to take a photo or two was by the by.

This shows the route down to the new part of the woods that has been opened up by the timber guys. The picture doesn’t really show how steep that is. I’d love to be able to run down it at full tilt, but with all those loose stones it’s just not possible.

This is the route I run down to this crossroads. There is a fourth trail, but it dies away pretty quickly. This path leads back to our house.

If I wanted a shorter route I can head up to the castle drive. It means running just over half a mile on tarmac and the trail between this point and the tarmac can be very messy, with deeply rutted mud tracks. I only go this way if the weather has been dry for a while. It’s sheltered by trees, as you can see, and rarely dries out. 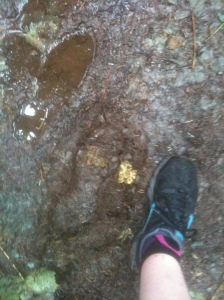 That shows my footprint on the way down to the second turn. Not the worst I’ve found the conditions here, but quite slippery.

My splits were identical for each mile, which I find amazing considering the fall of the land. At 10:52 pace it wasn’t the fastest I’ve run that course, but it was a good solid run after a hard long run on Sunday and I’ll take that thank you very much!

I took Murphy into the shower when we got home. For a white dog, he was very black! He doesn’t mind being in the shower and is very well behaved. I then ate quite quickly afterwards – finishing off the stew from last night. I’m feeling good. Good enough to tackle the ironing I guess!!

2 thoughts on “Runs on Water”