My last post was a bit down. I don’t apologise for that; it’s a reality that life dishes out downers and we need to deal with these and carry on. So I’m carrying on.

Yesterday I crossed the border, left Scotland and went to Carlisle in England’s county of Cumbria. Carlisle is just under 30 miles away, quite close by our standards, and a much larger place than our local town of Dumfries. I hadn’t intended to go to a running shop, but my chores led me in that direction. Honest they did!

I ended up gazing longingly at nice new trainers in Chivers Sports. I tried on about half a dozen different pairs, mostly Asics and Brooks – the two trainers I’ve bought in the past, and ran up and down the shop under the watchful eye of one of the salesman. He knew his stuff! I explained that I had been told that I was a neutral runner, but that I’d had Plantar Fasciitis and had the start of bunions on each big toe (requiring a wider fit). He wasn’t put off by my peculiar running style (flicking my twisted right leg so that I landed well) but noticed that my left foot rolled in slightly. I needed some support, but not the excessive support of the Asics I’d worn previous to owning my Brooks Ghost 5s.

In the end we were choosing between the Ghost 6 and the Defyance 7. I noticed that the Ghost  dipped away at the left big toe, making me want to roll more in that direction, but the Defyance had me landing square. It was a no-brainer: I choose the Defyance. 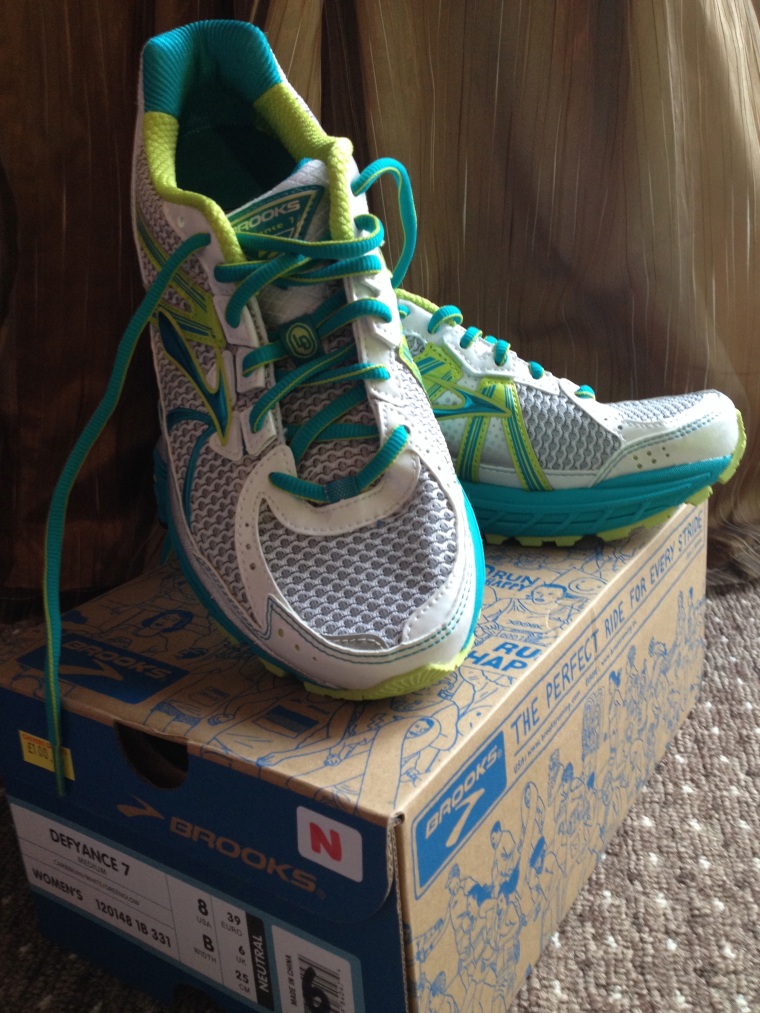 Brooks state that the Defyance has…

..that same amazing balance of the GTS…smoothly infused in the Neutral construction of this hybrid ride. From the reliable transition of the segmented crash pad to the adaptability of anatomical Brooks DNA and the adjustable eye row, this versatile shoe wins the all-around award every run.

After choosing, my salesman disappeared with my kicks for quite some time. It transpired that they keep records of every shoe sale to every customer and note down any issues that the customer has. My poor salesman had an essay to write! I eventually left with new shoes, at a discounted price and a discount card for future purchases.

So far as my running is concerned, well I’m almost ready to restart my half marathon training. I’ve been treading water a bit since Christmas, not wanting to put any undue strain on my left foot and re-spark my PF. I’ve done mostly short trail runs (up to 3 miles) and treadmill running. I’m enjoying trail running again, as is my dog!

The excessive rain we’ve been ‘enjoying’ has made parts of this route very, very muddy, but it doesn’t bother me other than obviously slowing me down! My old Nike Alvords are looking really manky these days, but they dust off when the mud dries and they are still  comfortable. I’ve even started leaving my Garmin at home and not timing my running. It’s quite liberating really!

My half training starts next week, so I’ll have to dust off my Jeff Galloway training app. I’ve set it for 11 minute mile pace, which I know I can more than handle, and will adjust the walk:run intervals as I feel fit. I’m feeling really positive about things just now so let’s just hope that I can stay injury free!