Some time in January 2017 I will be sporting a very long scar. On my last visit to Western General in Edinburgh Mr Khan, the neurosurgeon I’ve been seeing, asked how things had been. When I told him a little better for a short time, after the nerve block injection, and now worse than ever he said “Right, I’m booking you in for surgery”.

He then went through a large list of all the things that could go wrong. And gave me three sheets of double sided paper also listing them, in case I didn’t take him seriously.

For a start the scar will start somewhere at the base of my neck and go all the way down to the base of my spine, unless he’s also a fisherman – in which case it’ll be a small and inconspicuous scar. I suspect the truth is somewhere in between. When it’s healed, I’m thinking of getting a zip tattooed along either side of it.

The operation, if successful, could reduce my nerve pain by up to 85%, maybe more. My back pain is another matter and that might only improve by 50%. As I’ve had back pain since the age of 16, when it first declared itself a potential problem, I think a 50% reduction in that pain is fantastic! In any case, I’m happy with those figures. It’s the nerve pain, caused by my spine damaging the spinal cord, that is the most severe.

And, honestly, if it wasn’t for the drugs I’m taking I wouldn’t be able to stand up, never mind walk at the moment. I’m now on 1800mg of Gabapentin a day as well as 200mg of Celebrix. It’s no longer enough anymore and this week I will be asking my doctor if I can increase it again. Judging by how often I’m needing to do this, the damage to the nerves supplying my left leg especially is pretty extensive; at times I can no longer feel my leg and most of the time I have pins and needles. I’m also now getting a ghosting sensation, making me think that something is touching me. It’s all very strange and very painful. By evening I’m exhausted.

I put up with more than I probably should, largely because, as I said before, I’ve had back problems since I passed out in my mother’s arms at the age of 16. I’d been making my brothers’ beds (other than to help Mom, I can’t think why!) and turned quickly. I didn’t notice the pain at first, but by night I was in real trouble and the next morning, after descending the stairs, I just collapsed. I can distinctly remember seeing everything go black and tell my Mom I was about to pass out, to which she replied “No you’re not!” Sorry Mom, I did – leaving you to catch me!

I’ve recently been back up to Edinburgh to have a ‘long back x-ray’. Apparently this can’t be done in all hospitals, they have to have a specific bit of kit, so I drove two hours up the road to a lovely swanky new hospital near Dalkeith to get it done. As ever the staff were amazing. The letter inviting me up actually arrived when I was on holiday and I should have guessed from its tone how laid back this particular hospital seems to be!

I was really concerned, on opening the letter, to see that I’d missed the appointment, so I rang the lady who had sent it. “Oh that’s fine Julie, don’t worry about it – when can you come in? This Friday? Next Monday? You choose!” I’m sorry? I get to choose my own appointment? “Friday’s are bad for me,” I said, warming to the vibe, “How about Tuesday?” “Sure, ” she said “That’s fine – just turn up. The receptionist will know nothing about you, but that’s no problem.” Okay. Hmmm.

She was right though. The receptionist just pointed me in the direction of the X-Ray department, where someone met me and took me through. Within ten minutes I was out and x-rayed! I even got to see my ‘long back x-ray’! I could clearly see the curve of my spine going from right to left – the undoubted cause of all this – and the two vertebrae at odd angles, with no disc in between. I stopped short of a selfie with my spine, but only just!

In a couple of weeks I’m going into Dumfries for my second MRI scan. And then I’m just waiting for my surgery date.

Mr Khan had been most apologetic when talking about the timescale. “It’s going to be a long wait, I’m afraid!” Expecting another six months of hanging about, I don’t think he was ready for our reaction when he said “Yes, the full twelve weeks!”

Is that all? I explained that, as a sole trader, I was needing have the gallery open up until Christmas anyway, but after that I was all his. So I’ll be booked in for major surgery anytime after Christmas Day. Boxing Day even.

I’m still getting emails about running stuff, which I usually delete straightaway but haven’t yet had the heart to unsubscribe from. I should really. I can’t see me getting back into running the way I was before all this suddenly happened. I certainly can’t see me running half marathons, never mind the full ones I intended to run once I’d retired and had more time for training. I think I’ll be exceptionally lucky to build myself back up to the standard I was running at. I’m not discounting being a runner again, but I’m also not willing it so. I have to prepare that I may have to content myself with something less damaging to my back, perhaps cycling. It’s sad, but at least I know I was once a pretty reasonable runner, capable of a sub 30 minute 5k, a sub 60 minute 10k and a 2.22 Great North Run. Some runners half of my age won’t be able to claim that! I really should stop those emails…

I’m keeping positive; I have to stay positive – I can’t afford to let the mask slip. When asked, I always reply “I’m OK” or “I’m fine”. I’m going out less, I know that. I can’t really do nights out on the mobility scooter, and pub crawls are tough going when you can’t walk far! I have to plan every invitation to the nth degree, so a lot of the time I just don’t go. I hate asking Grant to push me about in the wheelchair and, after a few pints, he forgets the need to use kerb drops and races me across the road in front of oncoming traffic. I really didn’t think I was annoying him that much!

My Drug Alarm has just gone off. It’s time for my next dose. I make light of it when the alarm goes off in public; “Ooo, time for my narcotics, pass me the spliff!” It’s not a case of taking when I need them, because when I need them is usually too late. These pills have to be taken as directed – to maintain my haze, man. 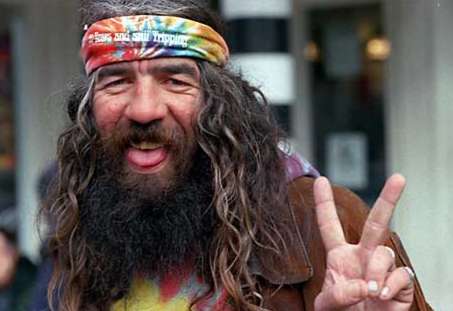